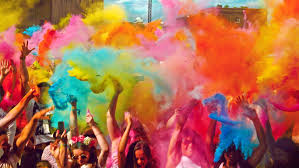 Holi is Indian tradition where people splash colors to others to celebrate the victory of good over evil as well as to welcome spring as winter ends. This festival is also called as festival of colors as colors are the main characteristic of this tradition. Despite the good intention and merry celebration, some of the chemicals contained in the colors used in holi turn out to be dangerous.

There are indications that some health hazard are exposed through the chemicals in holi colors such as copper sulfate, prussian blue, aluminium bromide, and mercury sulphite. Here is the list of harmful effects of colours containing chemicals used during holi.

But if some are inhaled and enter internal organs, possible other type of cancer can occur. For other list of carcinogenic chemicals, see List of Chemicals Known to Cause Cancer or Reproductive Toxicity.

There are some harmful effects of colours containing chemicals used during holi. Another effect caused by chemicals in holi colour powder is skin irritation. Some of the colours are made of chemicals that are indigestible and considered strange by the immune system. As a result, there may be skin irritation and itchiness. Skin may experience redness or rashes as a result. This can lead to  infection if unhygienic hands keep scratching it.

Not only it can cause skin irritation but hazardous chemicals in holi powder can trigger eye allergy. Some of the foreign chemicals intrude to the eyes and caused allergy. It may start with itchy and redness in the eyes. You will feel as if you want to scratch it. Moreover, the eyes may get teary and start to feel hot. The worse of untreated eye allergy may cause blindness whether it is permanent or not.

The  colours in the holi powders can be difficult to get rid of as most of them are not made of organic elements. As a result, the skin will experience abrasion. Skin abrasion is a forced skin exfoliation. This can cause wounds, irritation and further can also lead to infection if it is in the wrong case. The colour chemicals in holi powder usually is for heavy material and is not intended for skin.

Colour material that contains lead oxide such as black colour can cause renal failure. The chemical cancels some functions of the organs and cause failure. This case can occur when a person is heavily exposed to lead oxide in holi powder. Seeing how dangerous this chemical can be, it is safe to avoid using this for holi festival. Lead oxide is among Harmful Effects of Chemicals in Hair Gel You Should Be Aware.

The dry colours in holi powder often contain heavy metal material such as chromium. Chromium is lethal to human’s health especially for respiratory system. Inhalation to chromium in holi colors can cause bronchial ashtma. The chemical intrudes the lung and block the respiratory organ. For further inspection, consult doctor to check the possibility of catching one.

The colours containing chemicals during holi sometimes also contain zinc. It is because people rarely think about the safety of the colours but focus on how bright and shining the colours will be so they choose heavy metal material as additional chemical.

However, colours with zinc can cause fever as it attacks the immune system and cause surge of temperature within one’s body. In order to relieve the fever, use warm or ice compress for a night. Consume fever medicine and if the body is still not improving, go to the nearest hospital.

This disease is a special name for fragile bones problem. Itai ita disease can occur from holi colours that contain cadmium. When young kids are exposed to heavy amount of cadmium during holi, some of the inhaled chemicals will start to disrupt the bone and exfoliate the calcium in it.

As the consequence, they will get fragile bone. At first, there will be searing pain and followed by inability to walk normally. This may also followed by fever. This disease should be taken into serious consideration especially when it occurs to children as it disrupt their body growth. Cadmium itself is banned in many countries and is included in List of Banned Chemicals in Philippines.

Other health disease as an effect of colours containing chemicals during holi is kidney failure. When the body is exposed to many foreign and heavy chemicals, the kidney will not be able to process them and its elements will experience failure. Kidney failure is a serious and deadly disease.

This can occur especially if someone is frequently exposed to the chemicals. The person will start to get tired easily, having cold sweat, and followed by throwing up or losing ability to do daily task in full energy. For further inspection, consult the symptoms to the doctor.

Another respiratory system problem caused by the chemicals in holi colours is pneumonia. Pneumonia can occur from holi powder that contains nickel. Nickel itself is a heavy metal chemical and among List of Toxic Chemicals Severely Restricted for import and export that should not enter human’s body in the first place.

The nickel particles in lungs will cause pneumonia especially to children as their lungs are still growing. If this occurs, the person may experience heavy breathing and cold sweat as well as excessive sweat in hands ands feet.

Other Harmful Effects of Chemicals Used in Holi 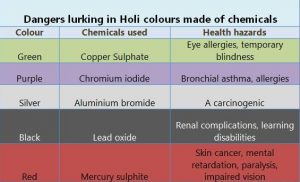 Seeing how dangerous the effects of those chemicals are, it is best to use natural or herbal extracted colours instead. Indeed, there are 30 harmful effects of colours containing chemicals used during holi festival you should avoid.

7 List of Banned Agricultural Chemicals that People Still Use