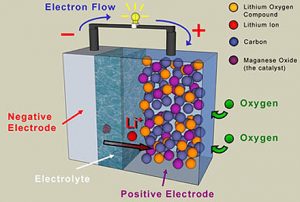 Battery is a portable power source utilized in many electronic tools and device. Battery uses electrochemical cells to produce electricity and powers the device connected to it. There are many types of battery, from AA+ battery to phone battery. Despite coming with different type, batteries are all made of some chemicals inside them.

The chemicals in battery will react to each of the elements. As a result, an electrical current exists and it will power any tools or devices connected to it. The elements come from certain chemicals tested to create electrochemical reaction and produce electricity.

Cadmium, along with nickel, is the main electrochemical in nickel-cadmium battery. The chemical formula for cadmium is Cd and atom number 48. Cadmium belongs to metal element with bluish grey color. In battery, the function of cadmium is as negative electrode as the polar of nickel hydroxide electrode.

It also acts as electrode in silver-cadmium battery. Industry widely relied on cadmium until European Union put a limit on its use to be only 0.01% in a product because of the hazard it has. Cadmium is listed in List of Banned Chemicals in Philippines and Severely Restricted.

Another main element in battery is zinc chloride. Zinc chloride is chemical compound with formula  ZnCl2. It is soluble in water and comes with colorless white appearance. The formation of zinc chloride is by reacting zinc with hydrogen chloride. It can deliver around 1.5 volts of electricity power.

The dry cell in the battery acts as anode with negative polar, while the inner rod as the positive cathode. Zinc-chloride usually works alongside with manganese (IV) oxide in the battery. The zinc-chloride cell is better than zinc-carbon one because it lasts longer and has steadier voltage input as well. This makes zinc-chloride a widely used chemical in battery.

Manganese (IV) oxide or manganese dioxide is another chemical used in battery. It is an inorganic compound with formula MnO2. It has blackish to brown appearance and is commonly found in old-fashioned battery such as zinc-carbon to alkaline battery.

The one that exists in battery is the electrolytic version of the chemical. It acts as a bridge between two polars and connect the currents of the electrocode in each polar. For maximum performance, it is also mixed with manganese sulfat in a battery. The other version of manganese dioxide is also potential to work on lithium ion battery.

Lithium-ion baterry uses lithium as the main chemical in its electrochemical process. It is a chemical compound with atom 3 and chemical element Li. People consider lithium to be the lightest metal element. It has silvery to white appearance and come in solid form. The function of lithium in battery, especially in lithium-ion one, is as electrode potential.

It can produce 3 volts per battery cell compared to others with maximum only 2 volts. Lithium now is widely used electrochemical in battery as it is also rechargeable. This reason fits the necessity of current modern need of non-disposable batteries. To know more about lithium, read Common Uses of Lithium in Everyday Life.

While previously cadmium is mentioned, this is its partner in electrochemical combination. Nickel is a ferromagnetic chemical. It has the chemical formula Ni and 28 atomic number. This chemical belongs to metal with silvery to a bit gold in appearance. Nickel in battery acts as positive cathode in its electrochemical mechanism while cadmium as the negative polar.

Nickel as battery chemical has been utilized for years and is one of the pioneers of battery. nickel uses in everyday life can be found in old-fashioned nickel-cadmium battery. Zinc battery sometimes also use nickel along with manganese dioxide. Despite its many uses, nickel is still a chemical used in battery.

Furthermore, the type of battery that mostly use ammonium chloride as the electrolyte is zinc-carbon battery. It connects manganese dioxide as the positive cathode to zinc as the negative anode. When electrolyte exists, a reaction that creates electricity can happen. Ammonium chloride is a bit acid and experts advise not to let the waste battery to be thrown carelessly as the chemical may pollute the environment.

Lead (IV) oxide or lead dioxide is the cathode in a lead acid battery. It is a chemical compound with formula PbO2. Coming with dark-brown crystallite appearance, unlike other battery chemicals, lead dioxide is hardly soluble in water. The reason why lead dioxide is a proven cathode in battery is because anomalous conductivity of the metallic compound.

Moreover, it works by shifting the equilibrium between lead dioxide and metallic lead. However, when battery is no longer used, it is advisable not to get it leaked. Lead dioxide is an oxidant that is poisonous to living being if it enters digestion system. Since it is also nearly insoluble in water, a potential accumulation in environment can harm the ecosystem. Thus, lead acid batteries are not to be utilized and thrown carelessly.

Other Chemicals in Battery Components

Battery is useful in powering electronic devices. The new improvement includes battery as energy source for vehicles. However, there are certain harms if there is leakage of the chemicals inside it. Several of them can be poisonous, or among the list of banned toxic chemicals. Thus, whenever the battery dies out or damaged, throwing it away or opening the contents is not advisable. Indeed, there are 14 chemicals used in battery industry people should be aware.

15 Safe Chemicals to Clean Oven without Harming Your Life

4 Importance of Chemistry for Engineers and Its Application in Industries

How Long Does It Take for Silver Nitrate to Wear Off The Skin?