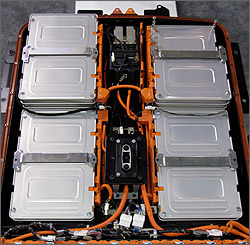 There are many types of car with various power engine and fueling system. While the usual power engine in cars uses petrol or solar, the advanced technology makes it possible to make electricity as the power train of a car. Electric car is a new innovation in automotive field. Instead of using fossil fuel, this type of car utilizes electricity to prevent air pollution as well as preserving natural source.

In preserving the electricity in the car, automakers use rechargeable battery that can last for few miles before the driver needs to recharge. In order to keep the performance without having to worry if the batteries die out, they apply batteries with certain chemicals.

These chemicals vary on function and form. Here is the list of chemicals used in electric car batteries.

The common type of battery in electric car is lithium ion. This type of battery uses lithium as the electrode that can produce electricity as it is one of common uses of lithium in everyday life. Lithium belongs to chemical with atomic number 3 and chemical formula of Li. The mechanism of lithium in lithium ion battery is the negative electrode move to the positive one and produce electricity. The type of lithium ion battery formerly used in electronic devices with small voltage but as technology develops, it is also applicable for electric car.

The recharge-ability of lithium ion battery in a car depend on the capacity of input and the maximum use of its output. Usually a car needs to recharge after minimum 100 miles of driving. The number differs from the technology automakers put in their vehicle.

Lead acid batteries were popular in the early production of electric car. Before lithium ion batteries become popular, lead acid as electric car battery compound was already up in its place. It uses lead acid as the electrolyte. The mechanism of creating electricity in lead acid battery involves reaction of hydrogen with sulfate ion. The typical energy it produces is 2 volts per one cell. For batteries with sulfated cells, the voltage each cell can produce can reach up to 3 volts.

Lead acid is placed in a container made of two lead plates to connect the positive and negative electrodes. The modern version of it also contains carbon black. Lead acid has low discharge possibility compared to lithium ion. The only disadvantage of lead acid is its discharge can be among harmful chemicals in the environment. Experts suspect lead acid to be toxic and a pollutant to environment.

Polymer is a chemical for lithium-polymer battery. Instead of using liquid as electrolyte, it uses polymer instead. The chemical is commonly found in plastic substance but the use of it is not limited to plastic alone. The composition of it includes repeated molecule subunits and is largely flexible to any use. Combined with lithium, polymer makes a good electrolyte that connects the positive polar of electrode with the negative ones.

The advantage of lithium polymer battery is its weight. The relatively light and small size makes this one used in many devices. Automakers try to apply lithium polymer battery to decrease the weight of the car and make it lighter. That being said the battery will definitely in bigger size compared to the one applied in portable device. Thus, polymer is one of chemical used in electric car batteries.

The previous zinc type of battery was not rechargeable but now that manufacturer improves the mechanism and people now can use a mechanically rechargeable zinc-air battery. The zinc utilized in this battery is the oxidizing one where it uses the oxygen from the air to connect the electrode and produce electricity. The zinc is the one that forms anode. When the anode reacting to electrolyte and oxygen, it send the power travels to the cathode.

Any batteries from lithium to nickel one can use molten salt. As molten salt belongs to sodium class, it tends to have lower ph score in opposite of the acid one. For this very reason, molten salt battery is different from acid one. Unlike manganese dioxide, molten salt itself contains electrolyte that works without catalization process. There is plan to use molten salt electrolyte for battery in electric car. Whether it will be more massive will need to wait for the time.

The only problem with this chemical is it is hard to find a safe insulator as the corrosion of insulator results in the supposed insulator to be conductive. As a result, the power decrease and the battery discharge. (Related to Sodium Sulfate Functions In Daily Life).

Sodium nickel chloride is common chemical in battery. The chemical acts as anode of the battery that works well with cadmium as the positive cathode. Mostly formed from solid state, it is safer and less likely to discharge unlike the sodium sulfur one. Another advantage of it is its long life time that is up to 20 years. This makes the chemical a potential for electric car.

Indeed, there are 7 potential chemicals used in electric car batteries.

10 Uses of Iron in Human Body – Element and Properties

Why Does Silver Nitrate Stain Human Skin? The Dangers

16 Uses of Sulfur and Its Compounds in Daily Life