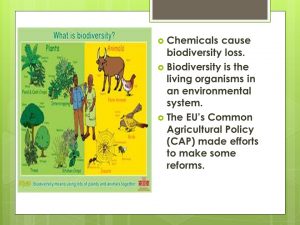 Chemical is undeniably part of our world. It helps us in so many aspects including health, industry, to safety. We encounter almost every products and stuffs coated with chemicals. But one thing that people often forget in this capitalistic world is chemical also affects the environment.

There must be certain effects, be it long term or short term that affects the biodiversity of environment. To know more about these effects, let’s see the harmful effects of chemicals on biodiversity.

Biodiversity comes from two words, bio that derivatives from biology and diversity that refers to various species; both animals and plants in this environment. Biodiversity exists not without a reason. The diverse species help to balance the natural process and food chain of living being. Therefore, it is a very important aspect.

Effects of Chemicals on Biodiversity

Here are the harmful effects of chemicals on biodiversity:

Some chemicals can cause great effects to some species metabolism. Back when technology were not so advanced, people barely know that some beneficial chemicals can harm non-human species. As a result, some species are in danger of extinction. There were some animals that already extinct in an epidemic area because of chemical contamination.

This usually happens in an environment that come in contact closely to factory that uses a lot of factory. Reduced population is not only lessening the biodiversity but the earth also losses some important role assigned to those species.Related article: Effects of Lawn Chemicals on Wildlife and Pets

Natural food chain is important in maintaining the balance of natural ecosystem. However, some chemicals, especially pesticide, can cause bioaccumulation. Bio-accumulation is when on chemical accumulates within one’s body, usually the one in the lowest chain. And when the higher species eat it, the chemicals accumulate even more. This can endanger the existence of the species.

If one species lost the ability to be part of the food chain, then it will be either extinction or sudden burst of population in an instant. For example, if snake extincts then some species that it usually eat such as mouse and other small animals will have flooding population. To know more about bioaccumulation, read Bad Effects of Agricultural Chemicals.

Only small numbers of chemicals on the list is really soluble and will not extend its compound in ecosystem. This causes many pollution problems in habitat supposedly only for non-human one. Some irresponsible companies can just throw out the waste of chemical into the river, sea, or soil.

This is certainly not a good sign to the biodiversity of ecosystem. The more habitat becomes polluted, the more the species are in danger. Government and citizen in general should have the awareness of how chronic the effect of polluted habitat by regulating the law.

Soil is the one that holds the underground water and the mechanism only works when the earth has many plants that their roots hold up the soil and the water inside. If more plants are dying because of the chemical, then it means a danger of water supply.

Water supply will significantly drop as the chemicals keep disturbing the nature of the ecosystem and making the biodiversity in mess. Water supplies obviously is not needed by human alone but also by animals and plants. Therefore, low water supply will create a long chained effects.

Science found new species where it comes as the result of chemical influence to the nature. Also, some of the species undergo degradation of bodily function close to defect. This means, chemical is very damaging in long term period even for the surviving part of biodiversity.

Surely, not all chemicals have this effect but when we see the long term effect, even the chemical produced by human body can affect the biodiversity. Whether there will be drastic evolution regarding humankind and other living being is still something we cannot predict, but sooner or later the evidence will be more apparent.

Food is really important for both human, animal, and plant. It is because it is the main source of sustaining a life along with water. If the food is contaminated by chemicals, it will create both short and long term problem. It will create an accumulation that threatens the life spans of all species.

If chemical pollution keeps occurring, the life spans of all human being may get cut and health problem will occur on earlier age. Thus, we should minimize the use of chemical to avoid it and be more aware of some banned chemicals just like Philippines with its List of Banned Chemicals in Philippines and the heavy industry country P,R.C with its List of Toxic Chemicals Banned in the P.R.C.

Another effect caused by the influence of chemical in biodiversity is forest decline. As chemicals threaten the soil especially accumulation of pesticide, the forest will be slower in recovering as there are not enough nutrients in the soil.

As a result, both humans and other living beings will feel the impact. Starting from elevated temperature, less source of food and woods or log. The more polluted the soils as well as the air because of chemical, the faster the forest will decline.

When a fatal case occurs such as chemical spill, it will affect the population of the affected species. Most of the time, a mass death will occur just like a homicide to living being. When this happens,it will lead to decreased population as well as other pollutions caused by the remnant of the species corpse. Chemical spill usually occurs in an area close to heavy factory.

Other chemicals drawback on biodiversity include:

Why Do Biologists Need to Have a Good Understanding of Chemistry?

15 List of Chemicals Needed for Above Ground Pool Treatment