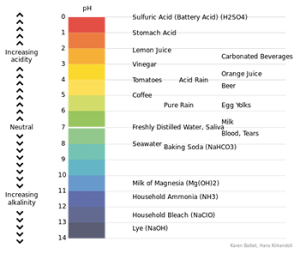 Have you ever tried lemon? How does it taste? Sour right? Yep, it’s because lemon contains citric acid. Lemon itself, is an example from various fruits that has a sour taste.

How about the base taste? Have you ever accidentally swallowed soap bubbles and tasted it? If you ever experienced that, it tastes bitter isn’t it?

Acids and Bases According to Arrhenius

The arrow mark points to the ionized strong acids that are perfectly ionized, so that a reaction from left to right occurred.

From the two examples above, you can see that acids contain hydrogen element. one characteristic of acids is that in a water dissolver, acids can ionize into positive charged hydrogen ion and there’s also a negative charged ion as the residue of that acids. There are some compounds like weak acids that didn’t release all its hydrogen when dissolved. For example:

Acetic acid is an example of weak acids. The ionization notation of a weak acids is using bidirectional because it only has a very few number of total ionization. And it can be reversed into CH3COOH. But not all compounds that have a hydrogen element can be referred as acids. Take glucose as an example. Glucose chemical equation is C6H12O6, but it is a neutral substance even though it is dissolved in water.

Table 1. Some examples of acids

Thus, let’s learn more about differences between acid and base with examples.

You may also read about:

According to Arrhenius, Bases are substances that produce Oh- ions when dissolved in water. Bases can also be referred as substances that expand OH- ions concentrate inside water. Just like acids, bases also divided into two types, strong bases and weak bases. How is the notation of strong bases notation written? Just like string acids, by using right arrow because it is a perfect ionization.

How about weak bases? It is the same as weak acids, the notation is written using a bidirectional arrow because only half of the substance is ionized. There is a reverse reaction in weak bases. For example:

From several examples above, we knew that bases substance releases OH- ion. OH- is also known to be base trait carrier.

Not every substance that contain OH can be called bases. Take methanol (alcohol) that has CH3OH notation, but it is considered as weak acids.

You may also read about:

Johannes N. Bronsted and Thomas Lowry explained their acids and bases models where acids are substances that can give proton (H+) or so-called “proton donors”. Whereas substance that receive protons are called “proton acceptor”.

With that theory, we can conclude that if a substance is whether an acids or bases by observing their ability to give or receive protons. In this context, the dissolver that is used is not only a water, but other substance like alcohol, liquid ammonia, ether, N-hexanne, etc.

H2SO4 : Acids, because it gives proton to H2O, so that it becomes HSO4–

HSO42- : Bases, because it receives proton from H3O+, so that it returns to H2SO4

That acids can produce conjugating acids after receiving H+ ion. H2SO4 acids form conjugating SO42. On the other hand, the bases H2O form H3O+ conjugating base.

NH4+   : Acids, because it gives proton to OH– so that it transforms to NH3

Other than those three different theories, there is another way to differentiate acids and bases. It uses color indicator along with pH level of a solution.

You can determine the pH level of acids and bases. pH itself is scaled between 1-14. Scale 1-6 of pH level is the acid region. Scale 8-14 of pH level is the base region and scale 7 is the neutral region. The simplest way to determine acids and bases is using litmus paper. Litmus paper has 2 colors, red and blue. If there’s a change of color in that paper, then that substance is the opposite of that paper. E.g. Red litmus paper represents acids. If it is given base, it will change into blue, but if it is given acids, it will stay red.

Have you understood about the differences between acid and base with examples now?

The acidity and basicity level can be determined by its ionization degree (α). The formula is total molecules that are ionized divided by total initial molecules. If it’s 1, then it is Strong acid or base. If it’s less than 1 then it is weak acid or base.

What Are Some Examples of Inorganic Compounds?

All Uses of Alkanes, Alkenes, and Alkynes in Industry and Many Fields