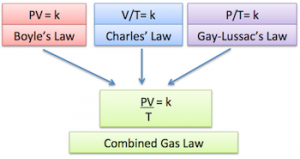 The gas particles move so freely that is why it is difficult to learn about the characteristics of the gas. The simplification of the problem for studying the gas is to create a definition and scope boundary about the ideal gas. The ideal gas is a gas that has the ideal special characteristic.

Those characteristics are having perfect resilient collision, Newton’s laws of motion is applied, no force between particles, moving in all directions and spread evenly. In real life, the ideal gas never existed. Here we are going to explain about gas laws definition, formulas, and examples.

The magnitude component involved in forming equations relating to some of the laws of an ideal gas by some scientists:

The law was discovered by a scientist Robert Boyle (1627-1691) known as Boyle’s Law. Boyle’s law reveals that:

“The result of multiplication between pressure and volume if the temperature remains constant.”

The law can be written with the following equation:

The temperature of the gas in the enclosed space at 27 ° C has a pressure of 5 x 105 Pa. The initial volume is V which is then pressed to a volume of ¼ V. What is the final pressure?

The investigation was continued by Jacques Charles (1747-1823). From the results of his investigation it became known that Charles Law states that:

“If the gas pressure in a closed space is kept constant, then the gas volume is directly proportional to the temperature.”

The form of the statements of the charles law can be written by the equation:

The graph applies to all gas types. The temperature is expressed in Kelvin (K). The basis for this Kelvin scale is absolute zero which is the lowest temperature that the gas reaches -273 ° C or 0 K. So that all types of gases can not be cooled again less than absolute zero.

One more scientist that influences the ideal gas equation that observes the relationship of pressure and temperature of the gas to the fixed volume is Joseph Gay Lussac. And produce a statement or law known as Gay Lussac’s Law. The statements are as follows:

“The gas pressure is directly proportional to the gas temperature if the volume in the enclosed space is fixed”.

The statement can be written with the following equation:

The relationship equation between pressure and temperature in Gay Lussac Law can be expressed in the graph as follows:

The result of the merger of the three laws of the above scientists will be obtained in the equation which became known as Boyle-Gay Lussac’s Law. The incorporation of the law can be expressed by the following equation:

The ideal gas temperature of 47 oC as much as 4 liters has a pressure of 1 atmosphere. What is the ideal gas pressure if the temperature is increased to 57 ° C and the volume is 3.3 liters!

Each gas has different characteristics if the pressure, volume and temperature of the gas are different although the number of molecules is the same. Therefore, a constant is called the Boltzman constant (k).

So the equation can be acquired as follows:

n = number of moles of gas

NA & k are called the common gas constants denoted by R. So the equation can be written to be:

The last equation is then called Ideal Gas Equation.

That’s all about the complete and clear explanation about gas laws definition, formulas, and examples. Happy studying chemistry!

12 List of Chemists Who Started Organic Chemistry – The Inventions