Aristotle is a Greek Scientist, today he is known as Father of Science. Let’s read about his biography. Aristotle was born on Stagira, Greek, in 384 BC. His father and uncle was a herbalist, so young Aristotle was understood about herbs in medicine. He was born in a rich family, because historian said his mother was rich and his father was a physician, one of the respected job in the era. 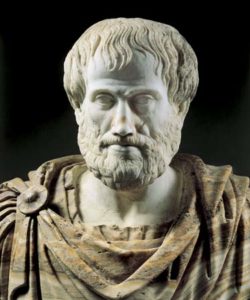 Even historian said his family have an estate in Chalchis Island, Greece. Maybe this is one of Aristotle’s success factor to became a scientist, by his family richness it can support Aristotle life while he was studying in Athens, Greece. At that time, most people who want get higher education should have be rich and clever.

Proxenus of Atarneus was married to Aristotle’s sister Arimneste. He had adopted Aristotle after his father died, until Aristotle decided went to Athens. Aristotle wanted pursued higher education when he was 17 years old. At this era there are two famous academy, Plato’s Academy and Pythagoras Academy. Plato is a famous Greek Philosopher, which his idea has influence many Western Science today. The education at that was free, but to enroll in Plato’s Academy people are have to pass Plato’s exam test, and then they are selected by Plato directly.

Aristotle had entered Plato’s academy when he was 17 years old. He became Socrates favorite student and he was maintain a relationship with Plato, the Director of Plato’s Academy for 20 years.

Luckily, Hermias, king of Atarneus and Assos in Mysia, had invited Aristotle to live there. When he stay in Mysia, Aristotle met Pythias his future wife, and married her. They live together and had a daughter Pythias.  Aristotle inspired gave her name by his wife name. But later his wife had died when his daughter still child.

Soon in 343 BC, his old friend, Philip II had invited him to the court in Macedonia. He wanted Aristotle to tutor his son, Prince Alexander, who will become Alexander The Great. Not only became Alexander tutor, he will that Aristotle could prepare Alexandef became his successor. From this event Aristotle had knew that his friend had became Macedonian King. Aristotle went to Macedonia when he was 41 years old. Before agreeing to tutor Alexander.

Aristotle had requested Philip II for give Stagira citizen the human right, for a reason:

When arrived in Stagira city, Aristotle was shocked by Stagira condition that caused by his friend, King Philip II. Because many Stagira citizen has been exiled and enslaved.
Aristotle had demanded Philip II to restore Stagira city which had been destroyed.

After this moment, Aristotle had been Stagira’s hero, not only freed Stagira he also gave great contribution for Greece’s Glory, by taught Alexander. And then Phillip II had appointed him for became Macedonian Royal Academy Director. This was Aristotle’s best academic career in his life. In this academy, Aristotle was taught famous Greek’s King such as Ptolemy and Alexander.

Aristotle had tutored Alexander about many subject such as medicine, philosophy, history, morals and art. A history said that Aristitle had told him about famous Greece Story The Illiad. Alexander became love to Illiad Story, made him inspired to conquer Persia Empire. He also borrowed Aristotle’s book while he was conquering.
Aristotle was encouraged Alexander to conquered eastern Greek or Persia.

Contrarily, he taught Alexander for treated Persian as animal or plant, because his hatred toward Persia. Why he hated Persia? We know in the history The Persia  had tried to conquer Greek, but they always failed. When he was 16, his father, Philip II was assassinated and he was ascended to the throne. From Aristotle’s doctrine, Alexander was succesfully conquered Persia.

Later he had explored Himalayan Mountain and Conquered India. Truthfully, he did not agree to Aristotle idea of treated Persian people inhumanly. He asked his soldier for married the woman of the conquered land. He was made an allience to The Persian and The Indians, he was rejected Aristotle’s doctrine for destroying them. Today the world had know Alexander The Great, as the most famous conqueror in the ancient time.

Back to the Topic about Aristotle’s Life

Aristotle was spend his life in there until his death in 322 BC. Later he was wrote many books about Philosophy, Math, Chemistry, and Biology. He was known in the world by his Philosophy idea, but later his science was not applied in Modern Science. Indirectly, his science was made the slow progress of science itself until the Renaissance Era. His contributions made him known as father of philosophy, especially is western world.

Aristotle’s View about The Atomic Theory

Everything in the world is arranged by the smallest particles that indivisible which is known as atom. A  means ‘un’ and tomos means ‘divide’. The atom is referred as the smallest unit in a matter. An atomic invisible even you look it by microscope! It is made nature symptom such as thunder. Thunder is kwn have proton and electron which are made by unit of atoms. Not only this, the atom can decide the taste of food that we eat by contact of each atom in the food, the result make the sensation of bitter or sweet cause by the size and the shape of atoms. The other words everything is created by atom

Leucippus the atom inventor thought an atom is eternal, indivisible, solid, unchangeable. Every material contains with same atom, the different is only in size an shape. Democritos had perfected Leucippus theory by his view where the change in a unit of atom create a change in a something.

After Democritos dead in 370 BC, Arsitotle had argued the world is create by continues matter which is relate with other. For example, the fire was made by wood’s friction, this shows the fire element was occured by other ‘wood’ the earth element. The Other example is the ice is made by water freeze by cold temperature or the other words the ice is made by two elements, water and wind element.

Aristotle had learned that universe is created from four elements which are fire, earth, wind and water. He learned this by learned Empedocles(490-430 BC) theory. From this theory, Aristotle spread Empedocles Theory to the chemistry field, and philosophy field. This theory has a big role in chemistry world about element. Aristotle believe that four elements have qualities: dryness, wetness, hotness and coldness. He categorized the earth element have characteristic is cold and dry, fire element is hot and dry, wind element is hot and wet  and water element is cold and wet.

Aristotle had discovered Perfect First Element, by his thought. He was called this “the first element”. This element has another called the aether or the quintessence. He said this element bot exist in the world, only exist in Heaven.
He believed the first element is follow the perfect path and explained that’s why heaven followed circular path around the earth. The first element can’t combine with four elements(earth, fire, water,wind), because it’s a pure element forever. It take a role to made the sun, moon, planets and stars become perfect.

You may also read: Development of Atomic Theory

The Development of Aristotle’s Theory and Influence in Science

After Ancient Greek Era, many Alchemist tried to proof that Aristotle’s quintessence is drift to Earth and it can cure all diseases. From Empedocles theory, they found the Philosopher’s Stone to identify it, they hoped it could turn any metals become a gold and a silver, which could make rich. They said it also could granted someone with external life.

This four elements had growing more than 1000 years which is this theory was developed by many alchemist. There is a famous history, where The Abbasyid Calliphate era Scientist, learn Aristotle’s Four Elements theorem for create a gold. They had translated Aristotle’s theory Greek to Arabic language. After read his theory, many of them assume that a gold or a silver can be substitute by combined any metals.

But in the process they was failed in produced gold, but they found new elements that contributed later in Mendeleev Periodic Table. They also founded the chemistry lab procedure which is applied in today chemistry. This contribution made Chemistry Science progress become faster than before The Islamic Golden Age era. The science world should thanks for Aristotle’s contributions, especially his view about the atomic theory.

Today the science of chemistry elements are based on Menedeleevperiodic table which was contributed by Aristotle’s Four Elements Theory. The development of this theory had change the quality of life, such as the discovered H2O in chemistry was based by Aristotle’s water element. This maen we can produce of mineral water independently, so we have an easier life than before.

You may also read: Proton Uses

Meanwhile, Aristotle is a philosopher that is well known around the world. In the long time ago, Aristotle and his theories became the first knowledge that we know. Also, Aristotle is a chemist and scientist from his atomic theory.

A-Z Chemicals Banned in Bread – We Consume It Everyday!