Atomic theory is one of the great discovery in the chemistry study. This is the basic concept which gives the better understanding about many branches of chemistry, both in Branches of Organic Chemistry and Branches of Inorganic Chemistry. One of the popular name in atomic studies is John Dalton. He released the postulates of john dalton to describe the atom model and properties. This article will cover the history of his theory, the detailed explanation about his postulates and further studies of atomic model. 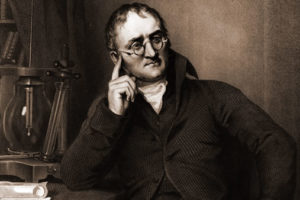 John Dalton was born in 6 September 1776. He is the popular English chemist, meteorologist and physicist. We know Dalton as the early chemist who discovered atom theory. His popular theory is Postulates of John Dalton about atom theory.

He’s the first man, after ancient greek philosopher, who truly gave the basic theory about theory which were very useful to further studies in chemical field, especially in atomic-related studies. Aside from atom theory, Dalton also conducted the studies in color blindness.

Meanwhile, he was also one of the pioneer in meteorologist. He recorded the weather daily for about 57 years. His discovery about weather and atmosphere led him to learn deeper about the properties of gases. This study became his foundation in performing the study about atom theory.

Also read: Scientists Who Contributed to The Atomic Theory

Prior to Dalton’s atomic theory, the famous Greek philosopher, Democritus, discovered the very basic theory about atom. He created the theory from the concept of there should be the part of matter which is extremely small that we as a human can not see. Democritus called this part as the atomos. It was indivisible in Greek language. He believed that atomos had different shape and dimension.

Meanwhile, they could move in constant speed in gases. They also collided with other atomos. After the collision, they could stick together. These combination which will then determine the properties of a certain matter. The theory of atom from Democritus surely inspired Dalton in creating his postulates.

After the great ancient theory of atom, Dalton made his theory of atom. In 1803, he released his atomic theory which will then become one of the most useful theory in chemistry. The 5 postulates of John Dalton of atom has five basic principles as follow:

1. All Mater Contains Very Small Particles which Are Called Atoms

In the first point, John Dalton tried to explain the law of mass conservation and law of definite proportions using the atom model. He believed that atoms is so small, indivisible, having small shape and solid spheres form. He said that atom can not be broken down into smaller parts. He also said that atoms have various motions.

2. Atom Can Not Be Destructed and Changed

On the second postulate of John Dalton, the explained that atom is the part of matter which can not be created, destroyed, divided or transformed. He used the Antoine Lavoisier theory to support this point

4. Atoms Combine in the Small and Whole-All Rations in Chemical Reactions

Based on Dalton’s experiment, he concluded that compounds are the combination of two or more different atoms. He said that the chemical reactions will occur based on atom to atom simple ratios which is 1:1 ratio. As an example, the salt or NaCl is the combination of sodium and chlorine gas. In the reaction, the same amount of sodium and chlorine gas, with ration 1:1, will form the salt NaCl. Chemical reaction occurs in the simple whole number ratios.

5. Atoms May Combine in More Than One-All Ratios in Element Reactions

On the fifth point, he said that there were multiples number ratios in various compounds like carbon dioxide compound. Carbon dioxide is the mix between the oxygen and carbon. In this reaction, one atom of carbon combines with two atoms of oxygen making the ratio of carbon and oxygen becomes 1:2 instead of simple 1:1.

So there are the detailed explanation about the John Dalton’s postulates about atom above.

Drawbacks from Postulates of John Dalton

Since Dalton is the first chemist after ancient Greek who discovered the atomic theory, his theory might contain some flaws. Based on postulates of John Dalton, here’re some major drawbacks of his theory:

1. Atom Is Not the Smallest Part of Matter

Atom can be broken down into smaller particles called protons, neutrons and electrons. We will detail this part on the next section. However, it’s still reasonable for him to conclude this point since at that time there were no instrument which was able to examine the single atom. Back then, the analytical chemistry studies has not been as developed as now on. He might not have thought about the internal model and structure of atom. He was also wrong about atom’s form. We now know that atom is far from the solid form.

2. Atoms in Same Element May Have Different Mass

3. Atoms from Different Element May Have Same Mass

Postulates of john dalton proposed that atoms react in the simple one-whole or 1:1 ratio in forming the compounds. After that, some further experiment showed that there are atoms which react in the complex ratio instead of 1:1 ratio. One of the example of this reaction is sugar compound which has the chemical formula of C12H22O11

5. Dalton Can Not Explain allotropes

Since it was the first modern atomic theory, we still undestand that dalton were not able to descrive the presence of allotropes. Later we know that there’re some properties differences in the elements of graphite, diamond and charcoal.

The chemist J.J. Thomson was able to discover the electron in 1897. He used cathode ray to conduct his experiment. The cathode ray which had the negative charge is used to found out the chemical model of atom. He then concluded that the atom consisted of negative charge from electrons and positive charge. He modeled atom like the plum pudding.

After Rutherford’s great study, Neils Bohr, who was Rutherford’s student, released the new atom model in 1913. His theory consists of some principles as follow: Electrons are in the specific location called orbits around the atom’s nucleus. They have the stable properties. Bohr called these orbitals as the stationary orbits Every orbital has the its own energy level. The different orbital has the different energy level. The orbit nearest the nucleus, as an example, will have the different energy level with the another orbit after it.

James Chadwick completed the chemical models of atoms in 1932. He successfully found the neutral charge in the atom. He performed the experiment by passing the alpha particles through the beryllium atoms. As per his laboratory experiment, he discovered that there were the neutral electric charges in the center of atom. He then named this part as the neutron. This also that would counter the postulates of John Dalton. The mass of neutron can create the isotopes, where atoms in same element had the same atomic number but different atomic mass.

Meanwhile, there are five postulates of John Dalton in atomic theory development. John Dalton’s was a great philosopher and scientist, his research and theories used in chemistry development and overall sciences knowledge.