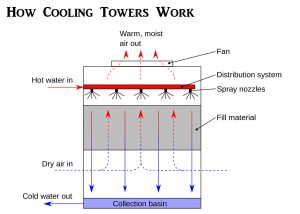 Cooling water tower system is a system or an arrangement of technologies in order to keep your cooling tower feed water and circulatory in a good condition, by removing impurities which could cause damage to your cooling water tower system. Cooling tower water system also used to lower the hot water temperature which usually used in industries, factories, buildings and such.

A cooling water tower system used in many industries, because it could control :

How does it work?

Here are how evaporative cooling works :

Bicarbonate as known as Hydrogen Carbonate is a chemical compound with HCO3- formula. We can usually find bicarbonate commonly in sodium bicarbonate form, which is in baking soda. In cooling water tower system, bicarbonate used for corrosion inhibitors. It is to neutralize acidity and protect metal components.

You might want to read : Uses of Sodium Bicarbonate in Daily Life

Bromine is a chemical element with symbol Br and atomic number 35, It is commonly used as an insecticides, which helps lots of farmer in keeping their crops clean from insects. In cooling water system, bromine also helps people to keep their cooling water tower system clean by being as an algaecides and biocides. It works to prevent the growth of microbes.

Phosphoric acid is a mineral with H3PO4 formula. It is commonly found in fertilizers in a form of salt, such as ammonium phosphate, calcium phosphate, etc. Phosphoric is an essential plant nutrient which is taken by plant’s roots and transferred it to its whole body. In cooling water tower system. It works to control pH of water and works as scale inhibitors to prevents the deposits of lime scales.

Meanwhile, there are some typically chemicals added to this process, such as:

Meanwhile, many chemicals used on this water treatment can be so expensive.

You might want to read : Differences between Acid, Base and Salt

There are lots of advantages when industries or companies are using cooling water tower system. Its benefits are:

Meanwhile, that’s all the material about chemicals used in cooling tower water treatment.

8 Dangers of Borax on Pets You Should Aware