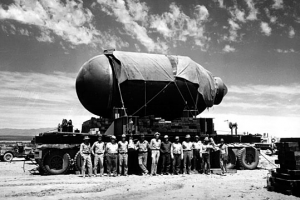 Oppenheimer is known to be the father of atomic bomb. Because of this the government of United States immediately. J. Robert Oppenheimer is a Harvard graduate with handful of achievements. Graduated early, it proves his intelligence on science. Robert Oppenheimer was born the year of 1904. In Manhattan Project, he is the leader who is in charge of developing plutonium into atomic bomb. He claimed that this process was the hardest one. his understanding of various neutrons and chemistry gave big contribution to Manhattan project.

Another brilliant chemist and physicist who worked for Manhattan project is Hans Bethe. He is in charge of the theory development where he and his team developed theory to enhance United States weaponry. His achievement during project includes essential theory in the development of nuclear bomb.  Toward his observation, he tried to combine hydrogen and helium nulcei.

This experiment played important role in defining the success of the nuclear weapon project as part of this Manhattan one. therefore, Hans Bethe is among the most influential scientists on Manhattan project along with the leader Oppenheimer.

Related to: Chemists Who Design Fireworks are Experts on Many Kinds of Explosions

Glenn Seaborg is among the few chemists invited to work on Manhattan project. He was born in America nad earned his Phd from Berkeley University. Seaborg is the discoverer of plutonium. Plutonium itself is very important in developing nuclear bomb. Not only he and he team discovered plutonium 239, he was able to control and concentrate the chemical to be tame enough for fat bomb development.

Furthermore, he contributed to the deadly bomb that made United States won against Japan. After the bomb dropped however, he was unable to see such devastating result that he encouraged to suppress the use of atomic bomb for fear of misuse.

His involvement in the project caused quite a stir considering he is working for a country who is against his homeland. Nonetheless, Klaus Fuchs is a brilliant scientist who contributed a lot to the development of weaponry in Manhattan project. He fled from Germany and attained British nationality. After that, the England sent him as representative of the country.

However, later they discovered Fuchs to be a spy working for Uni Soviet. During his involvement, he also sent the secret of atomic bomb to the Uni Soviet. Nonetheless, his main role as scientist still give a lot of contribution to the creation of the atomic bomb.

Fuchs was the one who give codename Fat Man to the atomic bomb. Later, he felt a sympathy toward communism and began sending information to Uni Soviet in hoping of them to develop their own bomb sooner. In 1949, United States and the union discovered his working as spy for the enemy. Because of this he served for nine years in jail. However, without his brilliance in contributing to the creation of atomic weapon remain unforgettable.

Related to Development of Atomic Theory

Another notable scientist working in Manhattan project is Ernest O. Lawrence. Lawrence worked in the project right after he got his doctorate degree from University of California. He was already interested in nuclear development before being recruited for the project. Lawrence was the one who invented cyclotron.

His main focus in Manhattan project is to create electromagnetic separation in the creation of nuclear or atomic bomb. As the program chief of the project, he also direct other scientists to be able to reach successful experiment. Later on, he joined support of nuclear testing suspense despite being involved in the making of it.

One more prominent figure involved in Manhattan project is Leo Szilard. Leo Szilard is closely associated with Albert Einstein who suggested this project to United States. Moreover, Szilard is also classmate of Einstein in University of Berlin. Together they drafted the Manhattan project. He did an inspection in the development of uranium fission. The chemical later is among others that combine to create atomic bomb. Ironically, he was the one against harnessing nuclear power in Germany but he ended up contributing in the making of this mass killing weapon along with his colleague.

One of the other non American scientists worked for Manhattan project is Enrico Fermi. Enrico Fermi is Italian physicist and chemist whom people know as the first creator of nuclear reactor. His important invention led government of United States eager to call him on the project.

The man graduated from University of Gottingen, Italia. Before joining the project, he already has extensive experiment in his home country. As part of United States ally, Italia sent Enrico Fermi to be representative in Manhattan project.

The only woman involved in this mega project of United States is Leona Woods. Leona Woods was born in Illinois, United States. She has extensive career as physicist and the student of Enrico Fermi. The one she is in charge is geiger counter.

Being the only woman does not stop her to contribute more. In fact, she was the one who solved xenon problem along with her husband. Because of her essential contribution, she is among the prominent scientists in Manhattan project. Indeed, that’s the chemists who worked on the Manhattan project.

Putting aside the result of the project, it is undeniably that the project is a successful and big stepping stone in the winning of United States and ally against their enemy. Their scientific contributions are important until now.

16 Controversial Scientists Who Got in Trouble for Their Ideas

12 List of Chemist Who Has a Solution for Not Succeeding