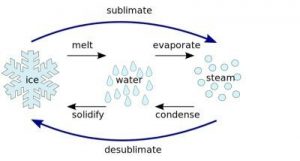 Such transformation process can occur naturally or artificially. Examples of transformation of gas to solid naturally such as when water vapor turns into dense snowflakes. While artificial instance is not deliberately done such as pollution generated from motor vehicles in the exhaust often has dried black solid soot due to the exhaust of gas engine.

But in addition, there is also a useful process of artificial crystallization which is the process of making dry ice from carbon dioxide, manufacture of ammonium sulfate and ammonium nitrate.

Sample of Transformation of Gas into Solid

Here are the examples of transformation of gas into solid solution:

Water vapor that accumulates in the atmosphere will reach the point of condensation in which the gas temperature turns into solid. Thus it forms clouds with a mass smaller than air. Rupture of water vapor is due to maximum capacity of clouds. If the rupture of water particle sent down to the earth is called rain, it is one of the natural phenomena occurring in the troposphere. And if its temperature is below 0°C, it will fall down as snow.

Burning is a chemical reaction of fuel with oxygen. In combustion of diesel motor, diesel fuel mix is put into the combustion chamber with air adiabatically. The smoke emitted by a diesel motor is particulate in gas waste containing PAHs and soot.

The black gas is a sign of burning failure. We need to be concerned for black soot as it contains carcinogens that can lead to cancer in humans. The formation of soot can be decreased by reducing the engine load. The low machine loads will also result in a little soot.

Charles Thilorier was the first person who observed the presence of solid CO2 in 1835 when he opened a pressurized liquid CO2 container. CO2 will develop a solid form without a liquid phase at a pressure of 5.1 atm and a temperature of about -79°C. The solid form is known as dry ice.

Its function is to provide smoke effects on the stage performance. The smoke has a density between 1,2 and 1,6 kg/dm3 which is larger than the air density that it will not rise up. We should avoid direct contact or use gloves as they may cause cold burns. Moreover, we shall use it in good ventilation as otherwise it will cause respiratory problems. Also read: Carbon Uses in Daily Life

Ammonium Nitrate is an inorganic compound. This compound is used as explosive raw materials and raw material for manufacture of nitrogen fertilizers. There is a form of powder and granules (prilled).

That’s the complete examples of transformation of gas into solid solution.

Ammonium sulfate is an anionic salt with 21% nitrogen content (ammonium cation) and 24% sulphur (anion sulphate). It is obtained from the process of ammonia treatment with sulfuric acid from oven-coke by chemical reaction: 2 NH3 + H2SO4 → (NH4) 2SO4

The process is by mixing ammonia gas and water vapor into a reactor containing an ammonium sulfate solution of about 2-4% of free sulfuric acid solution sample at 60°C. In order to maintain the acidity, it needs to be added with concentrated sulfuric acid. The dry powder of ammonium sulfate may be formed by spraying sulfuric acid into a reaction container containing ammonia gas. The heat of its reaction evaporates all the water in the system that it eventually forms flour-like salt. Also read: Strong Bases and Weak Bases Examples in Daily Life

Thus, hereby discussion of gas samples into solid. Hopefully it can give you more insights and useful advantage about the examples of transformation of gas into solid solution!

Here are m ore to learn:

All About The Differences Between Acid and Base with Example