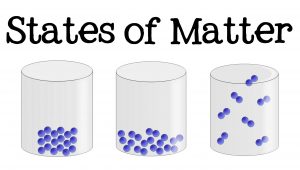 Every object inside our universe consist of substance or matter. Humans, animals, and even plants consist of substance or matter. Every matter consists of thousands of millions of particles. Matter can be defined as something that has mass and takes up space. Depending on its states, matter can be divided into three main groups, solid, liquid, and gas.

There are several examples of states of a matter around us, like in our house, schools, street, etc.

Does every solid substance, liquid substance, or even gas have a mass and take up some spaces? Yup. Does gas, something that can’t be seen by naked eyes, considered as a matter? How do we prove it? Here are some ways to prove that gas has mass and takes up space.

Characteristics of a matter

Here’s the states of matter definition and examples:

There are some examples of liquids in our everyday life, like water, alcohol, and oil. We take water as an example, if water is poured into a bottle then poured again into a glass then into a bowl, we can observe that the shape of water always follows its container without reducing its volume. From that example we can conclude that the characteristic of liquids is its volume will always stay the same but its shape will always change depending on its container. also read: Gas Laws Definition, Formulas, and Examples

There are some examples of gases that we can found, like the air around us and helium gas that is used to fill the air balloon. To determine the characteristic of gas, we can take room sprays as an example. When we spray room sprays in the corner of a room, we can smell the smell of the room sprays immediately even though we are far from the place where the room spray is sprayed.

It is because that gases spread the aroma of that room sprays so that the volume of that room sprays changed and always filled up the room. From that example we can conclude that the characteristic of gases is that its volume always changed depending on the room that it fills and its shape will also change depending on the room that it fills. To sum up, that’s the states of matter definition and examples you need to learn.

Changes in states of matter

An experiment to prove that a state of matter can be changed is following the steps below.

The result of the experiment is as the following explanations. After the heating occurs for a few minutes, the blocks of ice turned its states into water. And after a few minutes, the water turned its state into a steam. From that experiment, we can conclude that the states of a matter can be changed. also read: Measuring pH Value of Water in Chemistry

Camphor is an example of a changing in state of matter from solids into a gas. As we all know that camphor that is placed inside a wardrobe will become smaller from time to time until it is gone. When we open the wardrobe, we will immediately smell the fumes of a camphor and the clothes will become fragrant. This example shows us that camphor (which is solids) has turned into a fumes (which is a gas).

Changing in States of a Matter

These are the terms of the changing of state of a matter and its explanation.

Side Effects of Inhaling Hydrogen Sulphide Gas – The Harmful Substances