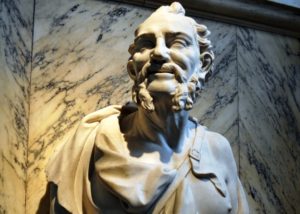 Democritus (c. 460 BCE – c. 370 BCE) was a pre-Socratic Ancient Greek philosopher who explained about composition of matter. He also pioneered the concept of atoms which spurred the evolution of atomic theories. As a result, more and more atomic theories came up from different scientists from time to time until the proposal of modern atomic theory which is more perfect with the support of experimental evidence. Read also: Democritus Theory of Atoms

Democritus took the name of “atom” from the Greek language (the prefix a means not and the word tomos means cut) which means the composition of matter that’s uncuttable and invisible (can’t be seen). Democritus got his thoughts about atom from his teacher, Leucippus, who was a pre-Socratic Ancient Greek philosopher.

Atom According to Democritus

Democritus and his teacher, Leucippus, stated that atoms were the smallest form of elements that formed reality. Democritus and Leucippus’ statement agreed the Empedocles and Anaxagoras pluralism teachings that stated reality consisted from various elements, not just consisted by only one element. But later opposed with the statement by Democritus that said forms of elements that’s uncuttable were considered as atoms.

Democritus’ statement was based on his mere observation that was inspired by the sand particles that formed the beach. Democritus analogized the sand as the atoms and the beach as the compounds. His point was that even though beach could be divided into sand particles, the sand itself couldn’t be divided anymore by plain view. According to him, atoms were fully solid that had no internal structures. His thoughts also explained that had to be a void or an empty space for movement of the atom. Democritus’ atomic model explained that all matters were made up of some extremely small structures called the atoms. Read also: Chemistry Models of Atoms

The existence of atoms in the universe was infinite and each atom had their own unique traits and characteristics. For example, the atoms in the water would act differently from those atoms that are in the wood. Even though it can’t be proven by experiment, only later in the 1800s that there’s an experimental evidence spurred by Democritus’ statement.

Atom theory according to Democritus:

Relation Between Atom and Another Aspects According to Democritus

Other than atoms, Democritus also had already made many works regarding science, universe, mathematics, literature, and engineering. As the pioneer of the early atomic theories, his work is very appreciated today even though his concepts were highly rejected back in his era by two scientists (Plato and Aristoteles) the drawbacks of the atomic theory that Democritus proposed.

In the end, after the 1800s, there was several people who were interested to make a more precise experiment pioneered by John Dalton. Dalton came up with his Dalton atomic theory which is supported by evidence and experiment which later improved until the modern atomic theory proposed.

Thereby an explanation about atoms viewed in the point of view of a scientist named Democritus from Greece. Hopefully this article can open our perception and knowledge about atoms and could improve our perception so that we can make a better development of atomic theories from time to time.

12 List of Chemist Who Has a Solution for Not Succeeding

8 Influential Chemists Who Worked on The Manhattan Project