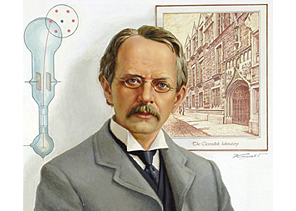 Atomic theory is one of the most basic study in chemistry. This theory opened the possibility to discover other new theories which then will be very useful in the chemistry study in general. One of the early scientist who discovered chemistry model of atoms was J.J. Thomson. He conducted the experiment to find out the new part in atom after the Dalton’s discovery.

He was the one who successfully discovered electrons in atom. JJ Thomson redefined the structure of atom. The atomic theory of JJ Thomson is not only beneficial for atomic study but also other fields including the invention of mass spectograph. He is one of the most influential people in the atomic study. This article will cover atomic theory by JJ Thomson, his early life and other atomic theories after his discovery.

Prior Study by Dalton that Triggered JJ Thomson

In 1803, John Dalton released his atomic theory which will then become one of the most useful theory in chemistry. John Dalton conducted the atomic theory called the five postulates of John Dalton.  His theory has five basic principle as following points:

Prior to Dalton’s atomic theory, the famous Greek philosopher, Democritus, discovered the very basic theory about atom. He created the theory from the concept of there should be the part of matter which is extremely small that we as a human can not see. Democritus called this part as the atomos. It was indivisible in Greek language. He believed that atomos have different shape and dimension. This basic atomic theory triggered other scientists including JJ Thomson to perform experiment to explain the atomic structure model.

After the discovery of Dalton, the scientist started to develop other great theories and experiments to help us understand the chemical models of atom. With the help of better laboratory tools, scientists were able to conduct more detailed experiment in defining atom model. In 18977, J.J Thomson performed several experiments to examine the structure of atom using the cathode ray application.

Based on this experiment, he released the concept of atom model as the plum pudding. The raisins represent the negative charge electrons while the dough represents the positive charges or protons of atom. He proved that atom consists of electrons and protons. He stated that the atom has the neutral characteristic which means that the amount of electrons is same with the amount of protons in one atom. Atom has positive charged protons which are surrounded by the negative charged electrons. Thus, that’s the atomic theory by JJ Thomson.

As we mentioned previously, JJ Thomson performed some experiment in his laboratory to find out the true model of atom. In that period of time, some other scientists also conducted similar experiment using the cathode ray tube to understand the atom model. They did pass the electric current to the vacuum tube. In this experiment, scientists could see the glowing light inside that vacuum tube.

Based on J.J Thomson’s experiment, he could compose the properties of electrons. He also included these properties to the atomic theory by JJ Thomson. Here’re some electrons properties from the JJ Thomson atomic experiments:

These properties of electrons are really useful to perform further studies about electrons and atomic theory in general. JJ Thomson put the great work to other scientists so that they can work on further researches using this concept.

However, this point was not entirely true as it showed the the different results from the experiments. After JJ Thomson’s experiment, Rutherford could prove that the most of space in the atom is empty. So that the mass of atom is not uniformly distributed. We can also conclude that the atomic model of plum pudding is no longer applicable to explain the structure model of atom.

The model of plum pudding was lack of experiment proves, so that other scientist tried to conduct more experiment to test his atomic model. Many scientists at that time were eager to perform further studies and experiments to explain the atomic model in more detail. One of the successor of atomic theory of JJ Thomson was Rutherford. He then did the great experiment which explained the flaws in the JJ Thomson’s atomic model.

However, there were few alpha particles which are deflected back. Rutherford believed that there were the positive charge nucleus. in the center of atom and negative charge electron around the nucleus. The nucleus finding by Rutherford is really helpful to understand the chemistry study, especially the chemical models of atom. To sum up, that is the limitation of atomic theory by JJ Thomson.

We know Thomson as one of the greatest physics and scientist in the world history. At the early age, J.J. Thomson’s father forced him to be the an engineer. Unfortunately, Thomson’s family could not afford the education fee for becoming an engineer as the engineer position required some apprenticeships at that time. So, J.J. Thomson joined the Owens College in Manchester.

They had the great faculty of science. After studying in Manchester, he was recommended to continue his study to Trinity College in Cambridge. In that university, he successfully became the mathematical physicist. After performed some experiments in Trinity College, in 1884 he got the title of Cavendish Professorship of Experimental Physics at Cambridge.

He was known for his brilliant mind in conducting apparatus in experiment and his analysis of the problems. He was also popularly known as the great lecturer who often encouraged his students. After his many great experiments, J.J. Thomson gained some honorable recognition from different constitution. His highest achievement was the Nobel Prize in Physics in 1906 and a Knighthood in 1908.

You may also read :

15 Great Chemists who Work in The Biotechnology Field