Reduction system in vapor pressure occurs due to very high solute and have no evaporation. In previous article described that one of the colligative characteristics of solutions is Boiling Point Increase. This time we will learn more about the other characteristics of Steam Pressure Reduction System. But before we discuss further about Steam Pressure Reduction System, it would be better if we first understand the process of evaporation first.

The Solvent Vapor Pressure is greater than the Solvent Pressure

Mixtures such as solutions have greater entropy or energy than a single material or pure solvent. This increase of entropy will lead to an increase in energy as well, which is required to move solvent molecules from the liquid or liquid phase to the gas phase.

How Do We Calculate Reduced Solvent Pressure?

First we emphasize the reduction in vapor pressure that occurs for substances dissolved in non-volatile solvents. Non volatile is non volatile and volatile is volatile.

By Description:
P = Vacuum pressure saturated solution
Po = pure solvent vapor pressure
Xp = mole fraction of solvent
The pressure drop from P0 to P is called a reduction in vapor pressure, which is denoted by ΔP, which ΔP is formulated by:

The mole fraction (X) in this case is expressed as a form of comparison between the moles of a species and the total moles in which they belong. So if it exemplified a solution made from a water solvent and a solute of urea.

Then the mole fraction of each substance is as follows:

If the solution is obtained only from two components ie solvent (p) and a solute (t) then the relationship of the two mole fractions can be expressed as follows:

If equations 1 and 2 are combined then the following equation will be obtained:

What if the solute in a solvent is volatile?

The above explanation is preferable to a solution whose solute nature is nonvolatile, whereas for solutions constructed from volatile solutes?

Examples of this mixture are bensene – toluene, water – ethanol, or acetone – ethyl acetate. Due to the volatile solute, the vapor of this solute will react to the total vapor of the solution. The steam present in this type of solution is obtained from solute molecules and solvent molecules.

After reading the above explanation then the total vapor pressure of the solution can be expressed by the formula: 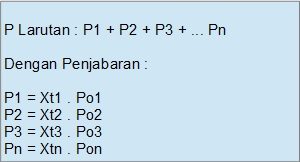 It should be remembered that Raoult’s Law applies only to ideal solutions or low concentrations of solutions. Where the ideal solution is achieved when the interaction between solute – solute, solvent, solute – solvent is obtained almost the same value. The mixture that meets Raoult’s Law or is ideal for example is benzene-toluene. Mixing the two will produce enthalpy that is almost zero “0” so this mixture is “ideal”.

If when dissolving the solute into a solvent is released heat (exothermic) then the entalpinya will be negative value, we can assume that there is a strong interaction between the solvent and solute, this may cause the solvent to have a smaller tendency to evaporate and the value the vapor pressure of the solution would be much smaller than the value determined by Raoult’s own law, this event being called the “negative deviation of Raoult’s law”.

An example is to dissolve acetone with water or a mixture of chloroform with acetone. Strong interactions between acetone – water or aseto – chlorofomes are caused by the presence of hydrogen bonds between the two.

So that’s the explanation of the Steam Pressure Reduction System. An example of a reduction in the vapor pressure in everyday life is the floating pool at a tourist site that adopts the characteristic of the dead sea that when you swim you will not drown. This is because in the sea dead a very high solute. Hopefully this article will be useful for you.

What are Common Uses of Acetone and Formalin? Brief Explanation Here!